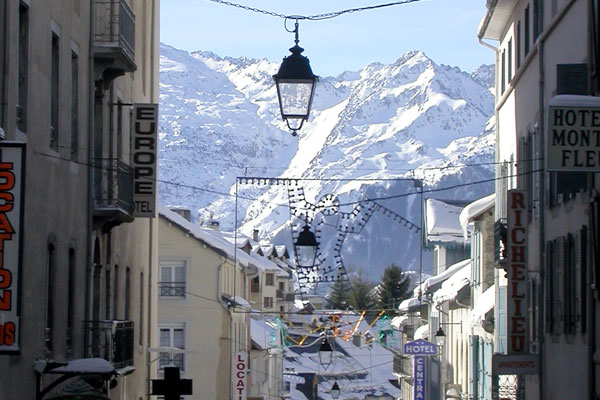 The traditional mountain village of Barèges lies at 1250 metres, half way up the Col du Tourmalet.

It is a small commune in the Midi-Pyrénées region of South-western France, in the Hautes-Pyrénées department. In the 2006 census, Barèges only registered a permanent population of 245, though these numbers swell in winter and summer with visitors and tourists.

Barèges’ stunning location in the Pays Toy and National Park of the Pyrenees makes it an outdoor activity heaven, as well as it being part of the Pyrenees’ largest ski resort, the Grand Tourmalet. This is also the second oldest ski resort in the Pyrenees, where many Alpine techniques were developed and practised.

While it is small, Barèges has all the essential amenities such as two bakeries, a butcher’s, pharmacy, newsagent, bookshop (selling maps etc), convenience store, several bars and some excellent restaurants.

There are also two small children’s play areas and a mini astro-turf pitch for children, as well as a summer outdoor pool, squash and tennis courts.

Of real significance to the village are the local Thermes, spa baths, which are the highest in the Pyrenees. The current building had a new extension added a couple of years ago, with the fantastic cieleo area, a Jacuzzi, warm pool, sauna and steam room complex with a domed glass ceiling, giving direct views of the mountain. The original Napoleonic building is still in use for a range of treatments.

There are several lovely walking paths accessible directly from the village,providing easy to reach views of the valley. The village also provides access to more challenging walks and hikes, including the famous GR10 “Grand Randonnee”, which traverses the Pyrenees from the Atlantic to the Mediterranean. The Pyrenees National Park and Neouvielle nature reserve begin just above Barèges and the famous “Cirque de Gavarnie” is nearby.

Barèges’ warm sulphurous waters first became generally known in 1675 when they were visited by Françoise d’Aubigné, Madame de Maintenon and the duke of Maine, son of Louis XIV. Marquise de Maintenon (1635 – 1719) was the second wife of King Louis XIV of France. Her marriage to the king was never officially announced or admitted. The road our chalet is on is called “Rue Madame de Maintenon”, after this royal visitor.

Barèges’ thermes still exist and are very much in use today, complete with a new building built a couple of years ago.

In July 1859, Napoleon III and the Empress Eugenie visited the area for spa treatments. While they were here, the Emperor decided to start an extensive construction programme in the valley. This included a bridge down at Luz St-Sauveur (still in use today and spanning the gorge that is used for via ferrata), a railway from Lourdes to Pierrefitte and medical facilities such as the military hospital founded in 1760 in Barèges. The spa played a large part in his decision to use Barèges as a base for his troops recuperating from the different battles.

For such a small village, Barèges has a remarkable history, for example:

All of our guides for our guided walking and trekking holidays are very familiar with the local area and its history and can tell you much, much more, as well as pointing out buildings of historic interest.

Barèges is in what is known as the Toy Country (Pays Toy in French). The Pays Toy consists of the Gave de Pau valley and the Valley of Barèges. To its south is the frontier with Spain and the three cirques of Gavarnie, Troumouse and Estaubé. The Néouvielle massif and its stunning lakes are also in the Pays Toy (above Barèges) and the Col du Tourmalet and Pic du Midi de Bigorre (home of the world-class astronomical observatory) separate the Pays Toy from neighbouring valleys.

For centuries the Pays Toy was a cut off area of the Pyrenees, accessible only in high summer when the snow had melted and you could get through from the other side. Because of being so closed off, the people inter-married and subsequently became very short. The richer the family, the shorter the person due to intense inter-marriage. Some churches still have the small separate doors where the rich could enter without having to mix with the agrarian hoi polloi of the village. As a result of this shortness, the people of these remote valleys became known as the Toy people (Toy means short in the local dialect).

Nowadays it is a real source of pride to be a Toy person, and a mark that you come from a family that has been in the region for generations.