This ski touring holiday is aimed at people with previous ski touring and/or off-piste experience and a reasonable level of fitness. It will be a mixture of day tours and a mountain refuge expedition deep into the Pyrenees National Park, with the chance to try some longer and more challenging routes and peaks such as the Vignemale, Breche de Roland, the Grande Fache, and the Neouvielle. 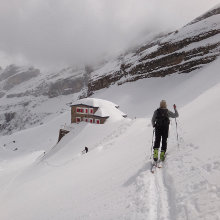 Mountainbug ski touring holidays are based from the mountain spa village and ski resort of Barèges, at our own very comfortable 3-star, ensuite, catered chalet les Cailloux. For the hut to hut tours, we’ll be staying in catered, mountain refuges. 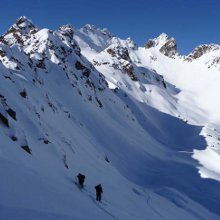 What the price includes

The price of your ski-touring holiday includes: 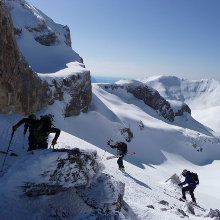 As you would expect, this high mountain ski touring trip is very dependent on the weather and snow conditions. The weather, visibility and temperature can change rapidly and we recommend that you wear layers so that you can easily adapt to changing temperatures. Good quality, lightweight kit (including full waterproofs) is strongly advised for the hut-to-hut tour.

The exact itinerary will depend on the weather and snow conditions during the week.

The refuge expedition will either be exploring the Pyrenees National Park locally to us, which is one of the most spectacular regions of the Pyrenees and could include an ascent of the Vignemale – the highest peak in the French Pyrenees. Or we might go to the Encantats in the Spanish Pyrenees. This is a rolling, high granitic massif with an excellent network of comfortable refuges. 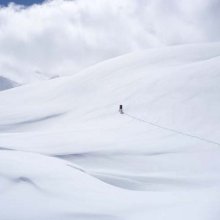 There are many options for hut-to-hut touring and typically very reliable snow conditions throughout April. We’re keeping our itinerary flexible at the moment. The options are: 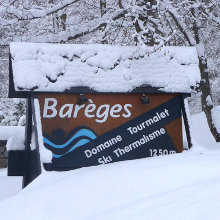 After your arrival in Barèges, we’ll arrange your equipment hire and lift passes. 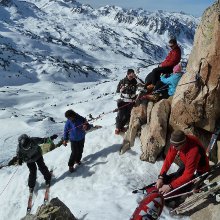 After spending some time in the resort practicing on and off the pistes we will try out some of the many short tour options available to us from the Grand Tourmalet resort: Routes on the Pic du Midi (2877m) and/or take the lifts to the top and cross over the Pas de la Crabe into the magnificent Neouvielle nature reserve, descending the Aigues Cluses “clear waters” valley.

We start our 2 day tour in the Pyrenees National park. 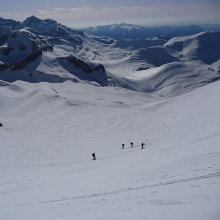 Today we appraoch the Eastern arret and glacier of the Vignemale. Once there, we’ll spend the night in the highest manned refuge in the Pyrenees, the Baysellance.

Today we’ll ascend the Vignemale (3298m), before tackling a ridge route towards the Gavarnie ski area. 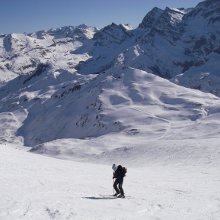 Today’s ascent of the Vignemale (3 298 m), allows us to reach the highest peak and jewel of the Hautes Pyrenees via its main Eastern glacier.

We’re then further rewarded by a fabulous ridege route and descent towards the Gavarnie ski resort via the Pic St Andre.

Today we’ll transfer to the Encantats National park, Spain, and spend the afternoon touring up to Refuge Restanca. 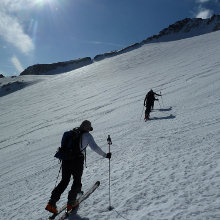 We’ll enjoy the change of scenery on the Spanish side as we ski-tour up to Restanca, a comfortable refuge perched by a lake at the foot of the Montardo (2.826 m).

After an early start to ascend the Pic, we do a fabulous descent to the Refuge Ventosa I Calvell. 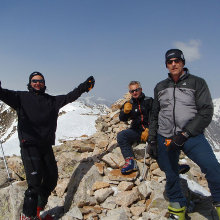 We leave our bags at the Refuge, so we can make a second foray up into the high granite cirques in this magical playground of peaks, ridges and hidden corrie lakes.

We get in as much ski touring as we can on our last day, enjoying the Spanish Pyrenees before our evening transfer back to Barèges. 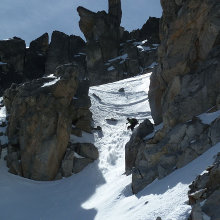 We’ll make the most of our last day, returning down the valley towards the Baquiera Beret ski resort via the famous Cirque des Colomers and its refuge. In the evening we have a transfer back to Barèges.

This is a typical ski-touring itinerary. Please note that your guide will choose your route according to the weather and snow conditions as well as the ability of your group, to ensure you have the most enjoyable and safe experience possible. 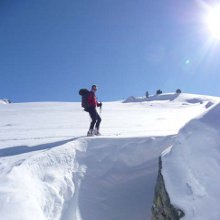 Please click on an image below to view the gallery.

We are flexible on dates and for groups of 3 or more can arrange additional dates. Please contact us if there is a trip you would like to do or if you would like us to organise bespoke trip for you. Find full details of group size and minimum numbers below this calendar.

Price for guided ski-touring holidays, Introductory and Iconic include:

The only extra costs would be:

What the price includes:

Not included in the price:

Transfers/lifts may add up to 130€ depending on the mode of transport (taxi/train).